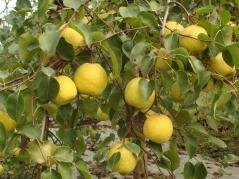 URBANA – The first sequencing of the Asiatic pear genome has recently been completed by an international consortium of seven worldwide universities and institutions including the University of Illinois.

“Our role on the team was to work on the strategy for sequencing, analyzing the data, understanding some of the biological processes, and writing the manuscript,” said U of I plant molecular geneticist Schuyler Korban, whose lab was involved in a consortium that previously sequenced the woodland strawberry genome.

“We ended up with an assembly that’s over 97 percent correct rather than 50 or 60 percent,” Korban said. “Sequencing technologies have improved over the years, and we’ve learned from previous strategies and have used a more effective and efficient approach for sequencing pear.  The cost as well is definitely lower than when genome sequencing first began.”

The project was developed when Professor Jun Wu from Nanjing Agricultural University in China spent a year in Korban’s lab to work on genetic diversity and global gene expression analysis of pear using U of I apple molecular markers and the apple microarray, as the pear and apple are closely related.

“During Wu’s stay in my lab, we met with her group leader Prof. Shaoling Zhang, who led this effort, and others who visited us, and we discussed working together on sequencing the pear genome.  Later, U of I signed a Memorandum of Understanding with Nanjing Agricultural University.”

China is the number one producer of pear, almost accounting for 60 percent of the world production. “The pear actually originated in China 65 million years ago,” he said. “It’s the center of the origin of pear, just like most fruits are. China is rich in germplasm.”

Korban explained that there are two major types of pear, European and Asiatic. The sequencing was actually done on the Asiatic pear, but Korban said that photos of the European pear have been used instead in some of the press releases causing some confusion.

“The Asiatic pear looks nothing like the European pear, for example the Bartlett pear,” Korban said.

The European pear is the more familiar pear-shaped fruit, but the Asiatic pear is a round fruit that looks like a yellow apple and is often advertised in U.S. grocery stores as an ‘apple pear’.

“The Asiatic pear is the most important commercial pear in China,” Korban said. “It’s sweeter, has a high level of antioxidants, and is healthy like the apple, but it is higher in lignified cells so when you bite into it, you can feel the grittiness, making it higher in fiber. It’s also more resistant to diseases including fire blight, which most of the European pears are susceptible to.”

Ray Ming from the U of I Department of Plant Biology contributed to the project as well as two of Korban’s post-doctoral research associates, Danman Zheng and Awais Khan.

Awais Khan, a postdoctoral research scientist working in the Korban lab, actively participated in coordination of groups and designing strategies for sequencing, assembly and anchoring of the genome. Khan spent a period of 10 days in China working with the team at Nanjing Agricultural University.

“The knowledge of the pear genome will greatly facilitate comparative genomics studies for identification of genes of consumer and grower interest in the Rosaceae family,” Khan said. “Ultimately, this will lead to rapid improvement of these fruits for disease resistance and for fruit quality traits.”

In addition to Nanjing and Illinois, the international team included researchers from the Bejing Genomics Institute, Zhejiang Academy of Agricultural Sciences, University of Georgia, University of Hawaii, and Tohoku University.