Canada geese give hunters the slip by hiding out in Chicago 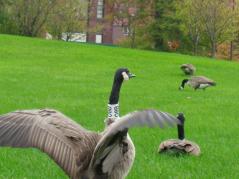 URBANA, Ill. – It’s open season for Canada geese in Illinois from mid-October to mid-January. Unfortunately for hunters, Canada geese are finding a new way to stay out of the line of fire. Rather than being “sitting ducks” in a rural pond, they’re setting up residence in the city.

University of Illinois ornithologist Mike Ward says he and a team of researchers conducted a recent study to try to find out why there were so many Canada geese in Chicago in the winter. “We thought the geese would fly to forage on nearby agricultural fields during the day, then fly back to the city to roost, but that wasn’t the case. What we learned is that they weren’t going to the city for food, they were going there because there were no hunters,” he explains.

The study finds that 85 percent of the Canada geese wintered in the Greater Chicago Metropolitan Area, and none made foraging flights to agricultural fields within or outside of the urban area. Their arrival demonstrated uncanny timing as well. Approximately 70 percent of the geese the researchers were tracking returned to the Chicagoland area prior to open hunting seasons.

Ward says survival rate was also high. “All of the Canada geese that spent the winter in Chicago survived, whereas half of the birds that decided to leave the Chicagoland area and go to areas where hunting is allowed, and more prevalent, were harvested.”

According to Ward, the birds’ ability to make use of nontraditional habitats in the city, such as green spaces, rooftops, and rail yards, and avoidance of agricultural fields suggests Canada geese may be minimizing risk rather than maximizing energy intake by using urban areas during winter.

“During mid-November through late February 2014–2016, we captured and attached transmitters to 41 geese within the Greater Chicago Metropolitan Area,” Ward says. “To each goose, we attached an aluminum band and a GPS transmitter attached to a white plastic waterfowl neck collar.” The birds were tracked to determine habitat selection and survival.

As the winter months grew colder and the snow-depth increased, the geese chose green spaces 55 percent less often. Instead, they increased their selection of industrial urban areas, such as water treatment facilities and deep-water areas within shipping canals, by over 140 percent.

With the tendency of Canada geese to stay put combined with their high survival rate when they choose to spend winter in the city, Ward says managing goose populations in the Greater Chicago Metropolitan Area may be challenging.

“Dense concentrations of geese in urban areas can pose threats to humans, including contamination of water sources, aggressive behavior toward humans, disease transmission, and strikes with aircraft,” Ward says. “Geese are the largest bird commonly struck by aircraft in North America and were responsible for 1,403 recorded bird strikes to civil aircraft from 1990 to 2012.”

Geese can also pose risks to human health and safety in urban areas, especially during winter months when large flocks congregate around limited resources and there is a strong disincentive (i.e., lower survival probability) for emigration outside of the city.

So, how can the geese be encouraged to leave?

“We have future studies that will investigate the best ways to harass geese to make them leave the city,” Ward says. “We are approaching this from an energy use perspective. If the geese cannot find good sources of food and the harassment cause them to use energy, they may be forced to leave the city in search of food in agricultural fields.”

Funding for this work came from the Illinois Department of Natural Resources and the U.S. Fish and Wildlife Service through the Wildlife Restoration Program, Midway International Airport, and the University of Illinois.