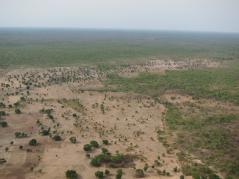 URBANA, Ill. – With over $3.4 billion spent in international conservation funding to protect biodiversity and stop tropical deforestation in Africa since the early 1990s, it makes sense to ask if the funding is effective. A recent study finds that conservation aid alone has not been able to counteract deforestation pressures, and in some cases may have even exacerbated forest loss.

University of Illinois’s Daniel Miller, who studies international environmental politics, and two other researchers examined data from 2000 to 2013 on the rates of deforestation across 42 sub-Saharan countries.

“We find evidence that some conservation aid actually leads to a short-term increase in deforestation,” Miller says. “Our hypothesis is that it’s displacement. The conservation aid may have gone toward a national park in, say, Benin, leading to less deforestation inside the park.  That’s the good news, but the bad news is that the funding may have just displaced forest clearing activities outside park boundaries. Our study looks at the country-size scale, so results may be capturing this displacement effect.”

Miller and his co-authors looked at a sub-set of African countries with high forest cover—countries like the Democratic Republic of Congo and Liberia—to see if dynamics were different. They found that quality of governance—rule of law, government effectiveness, whether citizens have a voice in selecting their leaders—affected the results.

“In heavily forested countries, we found that better governance on its own did not predict less deforestation,” Miller says, “but in such countries, better governance apparently allowed conservation aid to have a positive impact in reducing deforestation. It may be that good governance in countries where forests are an important natural resource helps ensure conservation and sustainable management not only in protected areas but outside them as well.”

Miller says there is already a lot of research looking at factors such as economic growth and rural population growth as deforestation drivers. A key innovation in this study is to include factors that can mitigate deforestation drivers, like conservation aid and existence of national parks and other projected areas, in the same statistical models.

“Unfortunately, the amount of aid is so little and the pressures to cut down the forest for furniture markets, firewood and building materials for homes, or other uses are so great that the conservation and money and protected areas are not enough to counteract the overall loss of forest in many countries.”

The study “Assessing the impact of international conservation aid on deforestation in sub-Saharan Africa” appears in Environmental Research Letters. It was written by Matthew Bare, Craig Kauffman, and Daniel C. Miller. The Gordon and Betty Moore Foundation and the MacArthur Foundation provided funding to support the research.