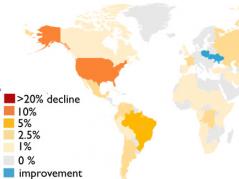 URBANA, Ill. – In the decade after the 1992 Earth Summit, at least $14 billion was devoted to biodiversity conservation around the globe. According to new research published in Nature, it was money well spent, preventing a 29 percent decline in threatened bird and mammal species.

“Effective conservation requires financial resources but donors and governments have been reluctant to provide the needed financing. Part of the reason is that there hasn’t been good evidence that previous funds have been effective,” says University of Illinois assistant professor Daniel Miller, who studies environmental policy and is one of the authors of the research. His main contribution to the study was in the area of international aid. Miller says the motivation for the work was to find out whether funding earmarked for conservation did what it set out to do.

“If you think about cause and effect, the cause is an infusion of investment in conservation and it should precede the effect, which would be a reduction in the number of threatened species. So we analyzed data from 1992 to 2003 on funding and then data points from 1996 through 2008 when the funding should be making a difference.” It did, preventing a 29 percent decline in biodiversity.

According to Miller, there have been a number of studies that have used quantitative impact evaluation techniques to show effectiveness of conservation programs, but this is the first global study to test whether countries that spend more on conservation actually achieve better conservation results.

A key element of this work is a new measurement called a biodiversity decline score to define change in the conservation status of every threatened bird and mammal species in every country. The score assigns a percentage of responsibility to protect a given species based on its range within a country. It was developed by Anthony Waldron and other authors on the Nature paper. Waldron, the lead author, was a visiting scholar at U of I during an important phase of the work.

Miller explains that when two countries share a border, such as the case of Indonesia and Malaysia, they may also share the range of threatened species such as the orangutan. “It wouldn’t be fair to assign full responsibility for protecting the orangutan to Malaysia. Because Indonesia has more of the range of the species, it would likely need to invest more to try to save it.”

Miller says previous efforts to determine biodiversity conservation effectiveness have not made such a distinction, which is important in terms of fairness in policy effort needed save threatened species.

“We were able to go back in time with retrospective data and use conservation funding data as the main predictor of the biodiversity decline scores for each threatened bird and mammal. Then we developed a model that accounts for the primary human pressures on threatened species,” Miller says. He says the biggest threat to species is habitat decline due to infrastructure development and agricultural expansion.

“Our model includes a variety of potential threats, but it also includes the counterweight of funding,” Miller says. “Investing in conservation pushes back on the weights that bring biodiversity down by 29 percent. We were surprised at how positive the finding was. We had a hunch that the funding would be effective, but didn’t realize it would be this effective.”

Although the analysis used was based on historical data, Miller says it can be used to predict the amount of funding needed by a country to improve biodiversity in the future.

“Policy makers can use conservation funding to help reverse the erosion of biodiversity,” Miller says. “Within a country, policy makers will have to prioritize what species need the most help and how best to spend those funds. But we know from this research, for the country as a whole, the expected biodiversity gains for investing different levels of additional funds.”

Some examples of how conservation funding is spent include: providing support for the management of protected areas like national parks or other kinds of reserves; supporting conservation infrastructure such as roads or guard towers to help in patrols; training conservation officers; educating the public; and even conducting scientific research.

Miller says the model does such a good job at predicting improvements that it can be used as a practical policy tool internationally to set conservation funding goals. For instance, because economic development is desirable, it could be used to allocate specific sums to countries such as Indonesia and Peru where economic growth is high but the conservation needs are also great. Such smart allocation, called for by the UN, would support true sustainable development, and could go a long way to slowing, and eventually reversing, current global declines in biodiversity.

The research was supported by UKDWP, the USDA National Institute of Food and Agriculture Hatch project 1009327, the MacArthur Foundation through the Advancing Conservation in a Social Context research initiative, Natural Sciences and Engineering Research Council Canada Discovery and Accelerator Grants, the UK Natural Environment Research Council, and the Odum School of Ecology.