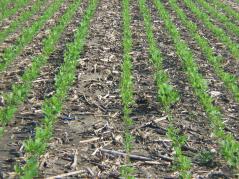 URBANA, Ill. – A 12-year University of Illinois study shows that, although the use of cover crops does not improve crop yields, the practice does increase the amount of sequestered soil organic carbon using three different soil management systems.

U of I soil scientist Ken Olson evaluated plots that were subjected to no-till, chisel plow and moldboard plow treatments with and without hairy vetch and cereal rye cover crops.

“By 2012, we found that the soil tillage plots that had cover-crop treatments had more soil organic carbon stock than those without cover crops for the same soil root zone and tillage treatment,” Olson said.

“In addition, the no-tilled, chisel plowed, and moldboard-plowed plots with cover crops all sequestered soil organic carbon above the pre-treatment baseline levels of the same tillage treatment.”

“This suggests that soil organic carbon stock losses from tillage, water erosion, and some disturbance or mixing during no-till planting, aeration, nitrogen injection in corn years, and mineralization were less than the soil organic carbon gain from the cover-crop treatment,” Olson said.

“Management practices, such as no-till and cover crops, must create an increase in net soil organic carbon from a previous pre-treatment baseline, as well as result in a net reduction in atmospheric carbon dioxide levels to be described as having sequestered soil organic carbon,” Olson said.

The study was conducted at U of I’s Dixon Springs Agricultural Research Center in southern Illinois beginning in 2001 on sloping ground with a moderately well drained, eroded soil.

“Long-Term, Effects of Cover Crops on Crop Yields, Soil Organic Carbon Stocks and Sequestration” was published in Open Journal of Soil Science and was co-authored by Stephen A. Ebelhar and James M. Lang. Olson is a researcher in the Department of Natural Resources and Environmental Sciences in the College of Agricultural, Consumer and Environmental Sciences at the University of Illinois. The published paper is available at http://tinyurl.com/jvvflvz.