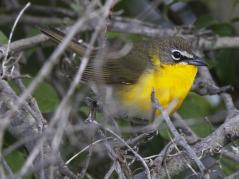 URBANA, Ill. – For a non-nocturnal bird, the yellow-breasted chat spends a significant amount of time visiting other birds’ territories during the night. A University of Illinois researcher who was studying birds’ movement during the day noticed that males were active almost every night, while the females were active at night but particularly during the window of time when they were fertile.

“We were studying the chat’s movement during the day, but we gathered data on the birds 24/7 and started seeing all of this nocturnal movement and wondered what they were doing,” said U of I ornithologist Michael Ward.

“I was using data from the night readings at first to calibrate the system,” Ward said.  He explained that females get up at night to roll the eggs so the membrane won’t stick to the eggs. That little bit of night movement was a way to test the triangulation software because they know the location of all nests, thereby providing a baseline for comparison. “I started plotting it out and thought this can’t be right. This bird is on the nest for an hour or two and then it’s all over the place. It can’t be that these signals are bouncing around that much. It has to be that the birds are actually moving off of the nest.”

Ward said that the chats’ night vision isn’t any better than ours, so they probably weren’t out foraging for insects to eat. There was no obvious reason for these bird’s nightly escapades. Then they noticed that females were only moving during their fertile period.

“These movements are much more common than you would expect,” Ward said. “You might expect some females getting up randomly during the night, but the pattern of these nocturnal forays suggests that they may be trying to increase their reproductive success by searching out partners other than their own social mate.”

In the field portion of the study, 32 birds were captured in mist nets, their age and sex logged, then fitted with a lightweight backpack radio transmitter that emits a signal that’s picked up by four towers, each with six antennas. The signal strength provides directionality and allows the researchers to compute the bird’s location using a simple triangulation. The bird’s location is recorded every three minutes which yielded approximately 12,000 points per bird. The birds’ nests were located and checked every 2 to 3 days until eggs hatched or the nest was eaten by a predator. Chats typically have one brood of four eggs each year and lay one a day beginning about 3 to 5 days after they become fertile. It’s not a broad fertility window.

Ward said that there is not a lot of research in this kind of bird behavior and in fact this is one of the first studies suggesting that diurnal birds move around at night for reproduction. “The Active nightlife of diurnal birds: extraterritorial forays and nocturnal activity patterns” is published in a 2014 issue of Animal Behaviour.  Mark Alessi, Thomas Benson, and Scott Chiavacci contributed to the article. The research received funding from the Illinois Department of Natural Resources.

“We know that females generally sleep on or near the nest but males usually have two or three sites in the area that they go to every night and they are usually pretty far away from the nest,” Ward said. “They nest in dense shrubbery so it would be difficult at night for the male to see the female leaving it.”

Ward said it’s a lot like a “soap opera.” Other studies have shown that male birds will harass the female or choose not to help her feed the young if they suspect infidelity. “Males are active at night and looking to copulate, but when their female is fertile, they don’t leave their territory. They try to either keep her around (which doesn’t seem to be working very well) and keep other males from coming in. It goes both ways. Females sneak around to other territories and so do males.”

How does the female on a nightly rendezvous know that the male she is visiting is actually awake and receptive? Ward said that in the case of yellow-breasted chats, which are a type of warbler, the male sings a sort of low song so the female can find him and hook-up.

With foraging for food and building nests during the day and cruising around all night, when do these birds actually sleep? Ward said that they noticed that, much like a human after a late night party, the day after the bird had a pretty active night, it isn’t as active the next day.

Ward said that this behavior may explain why this and other species that are generally territorial prefer to nest near others of the same species.

“Given their movements into others’ territories, efforts should be made to conserve large chunks of habitat that can accommodate many territories,” Ward said.