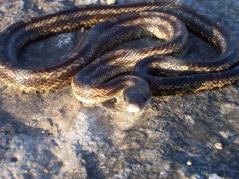 URBANA – Speculation about how animals will respond to climate change due to global warming led University of Illinois researcher Patrick Weatherhead and his students to conduct a study of ratsnakes at three different latitudes—Ontario, Illinois, and Texas. His findings suggest that ratsnakes will be able to adapt to the higher temperatures by becoming more active at night.

“Ratsnakes are a species with a broad geographic range so we could use latitude as a surrogate for climate change,” Weatherhead said. “What are ratsnakes in Illinois going to be dealing with given the projections for how much warmer it will be 50 years from now? Well, go to Texas and find out. That’s what they’re dealing with now. Snakes are ectotherms, that is, they use the environment to regulate their body temperature. We were able to compare ratsnakes’ ability to regulate their temperature in Texas as compared to Illinois and Canada.”

The research showed that ratsnakes in Canada, Illinois, and Texas would all benefit from global warming. “It would actually make the environment thermally better for them,” Weatherhead said. “Texas is already too hot for much of the day so it may cause them to shift to even more nocturnal foraging there and stay active at night for more of the season.”

As the higher temperatures associated with global warming begin to be more challenging for snakes in Illinois, will they be able to switch to nocturnal foraging? “We think that won’t be a problem for them,” Weatherhead said. “We already know that Illinois snakes show some limited amount of nocturnal activity because there is anecdotal evidence for nocturnal nest predation by snakes.”

Weatherhead said that as temperatures increase there are a lot of potential scenarios of what might happen in the ecosystem.

“If we start with the premise that with a thermal increase snakes will do better, the snake population may increase, but snakes are also facing diminished habitat and have a high road mortality. They are not a universally well-loved group of animals. People are known to purposely swerve in the road to kill them. So, just because temperatures may become more beneficial for snakes it doesn’t necessarily mean we’ll have a plague of snakes. We may, however, have northern expansion of ranges,” he said.

Weatherhead’s team also created snake models using a piece of copper pipe filled with water and painted black with a transmitter inside it. They placed the simulated snakes in various microhabitats--under a log, up in a tree, and on bare ground. This provided representative samples of all of the places that are available to a real snake while exposed to a range of weather conditions.

“We got the weather data from standard weather stations, then developed predictive equations from the weather conditions and the model snake’s body temperature under each condition,” Weatherhead said. “After you’ve sampled the environment once, then it’s just the physical relationship between those environmental factors and the inanimate snake model which very closely mimics a real snake in those same circumstances.  You plug the weather data into these equations and you can tell what temperature a snake in each of those environments would be at any time,” he said.

Weatherhead said the environmental domino effect could mean a reduction in some native bird populations because the snakes he studies are important predators of birds’ nests. During the night, in addition to eggs and young birds in nests, adult females may also get caught unawares.

“Females are often on the nest incubating eggs or brooding the young at night,” Weatherhead said. “If they are doing that during the day and a snake approaches, they rarely get caught by the snake, but at night they are much more vulnerable because snakes are very stealthy and the incubating birds don’t detect the snake approaching. This is good for the snake because it gets a bigger meal.

“The environmental repercussions could be significant if you start eliminating adult females from a population, particularly an endangered species,” he said. “The loss of females for native birds will have a big demographic effect on bird populations.”

Weatherhead is currently conducting another study in South Carolina comparing a species of snake that appears to only forage during the day with one that can switch to nocturnal foraging to understand more about the relationship between prey, predators and climate.

“We’re looking at the whole community of nesting birds that the snakes prey on,” he said. “We have cameras aimed at hundreds of nests to determine who the predators are, when the predation happens, and what the fate of the nest is both for the nest contents and the parent birds.”

Weatherhead explained that snakes can find nests in the dark because they don’t rely on vision alone to find birds’ nests.

“Snakes have a really good sense of smell,” he said. “We’ve done lab experiments in which we give snakes three choices under darker conditions. They can choose to go into a tube that leads to a dead mouse, a simulated live mouse, or both. They do better when they get both under light and dark conditions, so it looks as if they are fairly flexible regarding which sensory mechanism that they are using to find prey.”

The primary predators of ratsnakes are hawks and small carnivores. “When the snake tries to get to a nest during the day, the adult bird makes a commotion and attracts hawks or other snake predators,” Weatherhead said. “A snake is a bigger meal to a hawk than a few eggs.”  If a warmer climate causes snakes to be more active at night, they may be less vulnerable to animals that hunt them, so the mink, hawk, and raccoon populations could also be adversely affected. “Predicting the ecological consequences of climate change for wildlife requires going beyond the study of single species,” he said.

Latitudinal variation in thermal ecology of North American ratsnakes and its implications for the effect of climate warming on snakes was published in a 2012 issue of the Journal of Thermal Biology. Jinelle H. Sperry, Gerardo L.F. Carfagno, and Gabriel Blouin-Demers contributed to the study. Partial funding was provided by the United States Army and the Army Corps of Engineers.