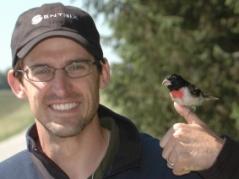 One cold December dawn in 2011, avian ecologist Jason Fischer waited with a couple of volunteers inside in a car with the heater running near one of the birdfeeders being used in his research project. Every 10 to 15 minutes, the team left the warmth of the vehicle to remove and tag any birds that had become trapped in special netting near the feeder. Ordinarily there are only a couple of small birds and tagging them is quick work. But Fischer recalls one net check that morning when the team found 15 birds in the net. “It took about 45 minutes to get them all out of the nets, measured, and banded. Everyone’s fingers were aching. It was 30 degrees outside, but you can’t wear gloves because the bands and the radio frequency identification tags that we put on the birds’ legs are so tiny,” Fischer said. Fortunately, all of the birds were fine, but after that experience, Fischer decided, for the sake of his volunteers’ fingers and the safety of the birds, to not continue net checks into December.

Fischer is a doctoral candidate whose advisor is  Jim Miller in the Department of Natural Resources and Environmental Sciences (NRES) in the College of Agricultural, Consumer and Environmental Sciences at the University of Illinois. NRES is an interdisciplinary unit in applied sciences that brings biological, physical, and social scientists together to identify, teach, and publicize solutions for the sustainability of urban, managed, and natural ecosystems from the local to global scale. Although most people think of ecologists as working in locations that are more pristine, Miller’s lab group tends to focus on biodiversity conservation in areas dominated by humans and their activities, including urban areas.  Fischer’s primary research project is looking at the urbanization of four bird species—house finches, northern cardinals, house sparrows, and American goldfinches.

“I’m interested in how people and nature interact in cities,” Fisher said. “Some species are able to adapt to the drastic changes we make to the landscapes and habitats in cities, and others are not. Why some can’t adapt is crucial to understanding how people are impacting the environment and how we can change our management approaches to improve biodiversity in cities, which I feel is a valuable goal.”

Fischer’s study sites are at 13 locations from Monticello to Homer, representing a range of habitat from rural to city. Thanks to the ingenuity of local farmer Jim Smith, Fischer has been able to fabricate squirrel-proof birdfeeders. It starts with an extra-tall shepherd’s hook custom made in a machine shop. The 7-foot height keeps squirrels from jumping vertically onto the birdfeeder. The shepherd’s hook is threaded through a four-inch-diameter PVC pipe that is about five feet tall. The pipe is too slippery for squirrels to climb.  The tube birdfeeder filled with black oil sunflower seeds hangs from the hook. The resulting contraption is not very visually appealing, but according to Fischer, it does the trick.

Although the birdfeeder installation with its PVC pipe is low tech, the data collection system is extremely high tech.

The tags are the same kind pet owners use so that their lost dog or cat can be scanned by animal control experts and identified by the unique number that’s embedded in the tag and linked to a database. It looks like one of those tiny bars used to attach a watchband to a wrist watch. A thin strip of all-weather electrical tape attaches the bar to bands that are put around the leg of a bird. Fischer’s birdfeeders are equipped with an RFID reader, so that every time a bird that’s marked comes back to the feeder, it logs who they are, how long they stay, and how frequently they return.

Fischer stressed that his research relies on the generosity of the homeowners who are willing to host a study site, keep the feeders filled with seed at their own expense, and “and let me come onto their property at ridiculous hours of the morning.” He has trained over 50 volunteers in how to handle birds safely, take them out of the nets, and attach a band to the bird’s leg.” Fischer credits the volunteers with his being able to tag thousands of birds during the scope of his research. His advisor added, “Jason has relied heavily on what’s being called ‘citizen science,’ or data collection by non-experts, and there’s a strong movement to take greater advantage of this approach in ecology. I think that Jason’s attempt to do so has been quite successful.”

According to Fischer, one of the things that surprised him about the project was the size of the bird population. “My assumption was that there were a fair number but that it was the same birds coming over and over to the feeders, and that’s true to a certain extent, but there’s a huge amount of turnover. Of the thousands of birds that I’ve captured, only 5 to 10 percent are birds that already have a tag, which means that there is a huge number of birds that are continually replacing each other at these birdfeeders,” he said.

Fischer and one or more volunteers visit each of the 13 study sites once a month and set up nets that snare tiny birds. Beginning at sunrise, the team checks the net every 15 minutes for three hours. “Once the bird is in hand, I attach a band to one of its legs and put the RFID tag on them. Then I assess how well the bird is doing. I look for any obvious signs of injury, deformity, or disease, and then I measure their condition, which in my study concerns the bird’s energy reserves.”

Measuring the bird’s body mass index (BMI) tells Fischer a lot about a bird’s condition. To calculate the BMI, he measures the bird’s leg and weight, and then uses the measurements to estimate energy reserves. He also blows the bird’s feathers aside and scores the amount of fat and muscle that is visible.  “If they have a good store of energy in terms of fat and muscle, they’ll have a better chance of withstanding the vagaries of nature,” he said. “For example, they don’t have to worry about starvation risk if something happens that they can’t forage for food. They’ve got a store on hand.

“One thing about the birds’ condition that I expected was that as urbanization increased, and consequently more birdfeeders provided easily acquired and available food, birds would have larger energy reserves, more fat, in cities. That’s not what I found. It seems that the condition of birds coming to bird feeders is pretty much level across the urbanization gradient. Rural birds aren’t leaner as other studies have suggested. What I’ve found is that feeder birds are able to maintain rather static levels of energy stores regardless of where they fall on the urbanization gradient,” Fischer said.

Fischer is still processing the mountain of data that has been collected from the RFID readers, including information on survival and foraging behavior, such as how often a bird comes back to a feeder, how long they feed per visit to the feeder, and how those data change over different seasons.

For one study, undergraduate Richard Hartland examined the patches of white on the tail feathers of goldfinches. Fisher explained that on another species of bird, the dark-eyed junco, the amount of white on the tail is associated with more aggressive and dominant behavior in birds that are able to obtain a higher-quality diet.  Because goldfinches also have white patches on their tail, Fischer wondered if there is a link between birds in better physical condition and the amount of tail white.

“I expected that birds in urban settings with higher-quality diets would have larger patches of tail white, but we found that condition and tail white weren’t related. What we did find was that in rural settings there was a wide variety of amounts of tail white among the birds we captured, but as we moved to more and more urbanized areas, there was less and less tail white. This could mean that higher-quality birds are avoiding urban areas. The other interesting factor is that tail white is a sign of age in goldfinches. As birds grow older, they drop their tail feathers and the new ones have larger patches of tail white. So older, more mature goldfinches that have learned how to forage and find mates are also avoiding the cities while the younger naïve individuals are going into the city,” he said.

Another study with undergraduate Laura Frasz resulted in the development of a new method for researchers to get more accurate data when measuring the growth bars on birds’ feathers. The growth bars, like tree rings, are associated with how well an organism is doing when they are growing. Frasz and Fischer learned that a combination of increased experience at taking the measurements and using a magnifying visor affected the accuracy of the data.

And a third study with undergraduate students Eric Janssen and Michelle Szpara looked at neophobia—fear of the new.

“In the first year of my project, we learned about behavior by looking at the color of the bands on the bird’s legs. I didn’t have the RFID system yet,” Fischer said. “The second year, we attached the reader to the feeders, which was a large visual shift in what the feeder looked like and a change to what the birds perched on to feed. I wanted to see if the newness would affect how the birds fed so I set up video cameras to record foraging two days before and for two weeks after the readers were installed on the feeders.  Eric and Michelle looked through all of the footage. We found that it took multiple days for the house sparrows, house finches, and cardinals to come back to the feeder. Foraging behavior didn’t really return to normal for almost a week for all of our study species. That suggests that even birds that are adapted to urban environments still have very powerful neophobic reactions that affect their behavior.

“Cities are dynamic with lots of new stimuli for wildlife,” Fischer said. “If those birds are responding to that constantly changing environment the same way that they responded to this birdfeeder, that means that the area that they utilize to forage is much more flexible than we initially imagined.”

Miller was one of the first to emphasize the importance of ecology and biodiversity conservation in urban and suburban environments in the late 1990s. “There were other researchers whose lead I was following but not many,” Miller said. “This area of ecology has really taken off over the last two decades.” Fischer believes that urban ecology studies like his will allow scientists to look more carefully at the ways humans are changing the environment. “We’ll have the opportunity to look back at the ecological principles about the way the world works, see how we’ve modified them, and what the consequences have been.”