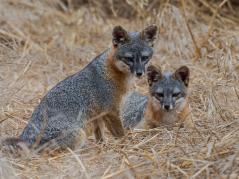 URBANA, Ill. – Protecting an ecological paradise like the island of Santa Cruz can be challenging for its resource managers who want to maximize visitor experiences while minimizing negative impacts on the park. As the largest of five islands in Channel Islands National Park off the coast of California, Santa Cruz boasts over 2,000 species of plants and animals, some of which are not found anywhere else on earth. But a recent University of Illinois study says the island’s rich biodiversity may not be what’s valued most by its stakeholders.

For the U of I study, 323 randomly selected visitors to the island were surveyed before boarding a boat to return to the mainland. Using a map of the island, they allocated “preference points” which were used to weigh the importance of 12 social values such as aesthetics, recreation, and perceived biodiversity.

“We found that people were more likely to place biodiversity values on areas of the island that weren’t actually biologically diverse,” says U of I social scientist Carena van Riper. “There was a clear negative relationship between the likelihood of a point assignment and biodiversity.”

“They may have seen an island fox, for example. It’s a charismatic creature that’s everywhere in the park. They garner a lot of attention. People likely assigned biodiversity values to places where they had these unusual wildlife encounters, whereas a lot of other species wouldn’t be seen where people are on trails,” van Riper says. “They also placed value on rocky cliffs, mountain summits that don’t have a lot of vegetation. They’re aesthetically beautiful, but they aren’t biologically diverse.”

Van Riper says the top ranking qualities that people are looking for in these types of landscapes are aesthetics, recreation, learning, therapeutic benefits, and perceived biodiversity—although as she learned, their perception of what areas are actually biodiverse may not be accurate.

The study also finds that people with more knowledge of the park recognized the biodiversity values of places in the protected two-thirds of the island that they hadn’t experienced firsthand. Those with knowledge didn’t have to experience those areas to detect their intrinsic qualities and benefit from their “ecosystem services.”

Although most visitors to the islands were environmentally friendly, van Riper says that surprisingly there weren’t that many rugged, outdoorsy people. “I saw a fair number of people come off the boat with suitcases on wheels on the dirt roads. There isn’t much infrastructure on the island so a lot of folks were surprised to learn that they couldn’t purchase a coffee like they could have just across the harbor in Ventura.”

The desire for comforts or amenities is in conflict with what natural resource managers are trying to accomplish. “For some visitors, environmental degradation is often preferred.  Not necessarily major infrastructure, but a trail system, a campsite where vegetation has been cleared, places where you can easily hang a lantern on a tree, or tie up a pack animal. All of these are different forms of impact and they’re desired.  That was confirmed through our results. And people didn’t recognize these as having potential environmental impacts,” van Riper says.

Mapping the island for its social values can allow managers of protected areas like Santa Cruz to make decisions that are in line with what people see, what they experience, and what they believe, van Riper says. Having this tool to represent people’s perspectives in relation to the environment can help managers understand what attracts people, why they care about protected landscapes, and may lead to engagement in stewardship activities.

Something as simple as providing access is an important consideration. “If you’re making decisions about development, such as where to put a trail system and what areas to feature or showcase, knowing what people believe is valuable can help and may even generate support for the park among stakeholders,” van Riper says.

The study looked at management priorities, what features visitors value, and where they overlap. “By mapping values we can identify areas that people recognize as valuable and other places the managers find valuable but go unrecognized by visitors. We can determine the economic importance of an area because people are willing to pay to come to an area, but this tool also allows us to identify intangible social values such as the spirituality of a place and the aesthetics. These are social values that aren’t easily captured with traditional methods,” van Riper says.

“Toward an integrated understanding of perceived biodiversity values and environmental conditions in a national park” is authored by Carena J. van Riper, Gerard T. Kyle, Benson C. Sherrouse, Kenneth J. Bagstad, and Stephen G. Sutton. It is published in Ecological Indicators. The research is based on van Riper’s previous work in the Applied Biodiversity Sciences NSF-IGERT Program at Texas A&M University.