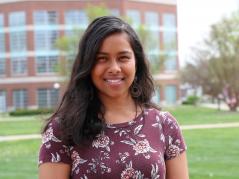 Krti Tallam is finishing her sophomore year at the University of Illinois in the College of ACES Department of Natural Resources and Environmental Sciences with a concentration in fish and wildlife. She has already completed three internships in India and just landed a prestigious scholarship—none of which fell in her lap. She accomplished these feats on her own using what she calls, “self-exploration.”

First, about the scholarship. Up to 60 current college sophomores and juniors, out of several hundred, are chosen annually for the Udall Undergraduate Scholarship.  Each student receives up to $7,000 to use toward their education.

Krti wanted to find a way to pay for tuition, so she searched for programs, found Udall, then spent several months applying.

“I was looking at several scholarship programs,” says Krti. “The way I approached the search was to ask, if a program fits morally with my ethics and my values.”

Krti says one program didn’t make her cut because the organization’s approach to sustainability didn’t match hers. Udall did.

The application form is not for the faint of heart. In addition to the usual questions about internships, work experiences, and community service activities, the Udall application requires nine short essays—on topics such as career goals, leadership, and significant public service experiences—and one 800-word essay relating to the work of the scholarship namesakes Arizona Congressman Morris K. Udall or Secretary of Interior Stewart L. Udall. The Udall’s careers had a significant impact on Native American self-governance, health care, and the stewardship of public lands and natural resources.

“One of the things that echoed with me is Udall’s ethics and the value it places on the environment. We take it for granted, that trees will last forever. But the reality is that they won’t unless we put effort, money, and thought into conserving trees, ameliorating the situation that we’ve put our planet in. That was a core value that stuck out with me. I want to be among people who care about the environment. They may not make a lot of money and have a very comfortable life. But the work will be rewarding for the planet and not necessarily for the self.”

Krti says human-wildlife conflict mitigation is her passion—a passion she has already put into practice. Using her own “self-exploration,” not a traditional study abroad program, Krti created opportunities for herself. She worked in India when she was in eleventh grade, during her freshman year in college, and again over winter break this past January.

“The area I was working in was very rural, where farmland and wildlife overlap. I was working with Asian elephants. They’re actually very gentle animals. They walk through crops and never damage them.  But if people startle the elephants, deaths occur. Governments might then say, then let’s get rid of the elephants. But that can’t be the case. Working with stakeholders, farmers, the forest department, conservationists—people who are on the ground level—taught me so much.”

Although Krti didn’t get any academic credit for the internships, she says the experience was invaluable.

“It showed me the core meaning of wildlife conservation and what it means to work with people whose lives depend on land and the wildlife that lives alongside them. Even if you don’t care about wildlife, if you care about your crops, wildlife play a part in that system, sustaining that environment. You have to figure out how to work with both.”