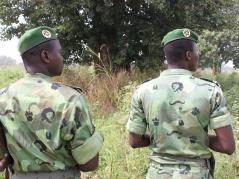 URBANA, Ill. – Conservation efforts are designed to restrict activities in protected areas, but the restrictions can have unintended consequences. A University of Illinois researcher examined the results of a multi-million dollar European Union aid project in West Africa and found that a country’s national governance quality can affect the livelihoods of families who rely on resources from national parks and other protected areas.

U of I’s Daniel Miller, who studies environmental politics and policy, was intrigued by a conservation intervention that took place from 2001 to 2008 in the W National Park region in Africa. The purpose of the project was to help reverse natural resource degradation and conserve biodiversity so as to benefit local people.

Miller conducted interviews from 2010 to 2011 with 300 households in villages adjacent to the W National Park in Benin and Niger. He used the original data from the interviews to explain how and why the same conservation project led to different outcomes in the two national political contexts.

“We have this rare situation where there is a transboundary aid project and two very different political systems,” Miller says. “Benin and Niger differ in governance quality and the extent of decentralization reform. Niger has more instability, Benin being relatively more stable and better governed. This allowed us to compare the effects of a blanket conservation aid project.”

Miller says that an aerial map of the area shows a stark divide showing the greener grass inside the park. “The soil is richer and there is more fauna,” Miller says. “On the outskirts of the park, much of the land has been used for agriculture or grazing. So people sometimes sneak into the park to hunt, graze their animals, or even plant crops. They can get a large windfall, but the risks are high if they’re caught: huge fines, prison, and sometimes worse.”

In comparison to national parks in the United States or other high-income countries, these parks are difficult to access and very poorly staffed. The funding from the project was used to ramp up enforcement, build infrastructure like roads, park guard posts, and watering holes to attract animals—all efforts to help reinforce the area and delineate the perimeters more clearly.

“The park was like a supermarket for poor families,” Miller says. “All of a sudden, with this international aid project the supermarket was closed. In Benin, where they had better governance and more local voice they could mitigate the effects of the ‘supermarket’ closing.”

The results of the study showed that there were indeed negative consequences for people’s livelihoods, but in Niger the impacts were much greater, particularly for the poorest people and those who saw the most severe reduction in their access to park resources.

“We believe it’s because they didn’t have a voice to resist or to shape what the enforcement would look like,” Miller says. “Benin had hunting associations that become co-management entities with the park so the local people affected by the park and the project had at least some a voice to shape how the park was managed. Benin also had significant increases in mammal species abundance.”

By contrast, Miller says, greater levels of enforcement in Niger’s national park were associated with sharply decreasing income levels among park neighbors but did not have as statistically signiﬁcant effect on wildlife populations.

“Governance matters,” Miller says. “In this case, Benin’s better government and more decentralization led to better social and ecological outcomes. These results highlight the importance of national political context to the outcomes of aid-funded conservation efforts.”

Miller describes the broader picture of the democratic decentralization processes unfolding across more than 60 countries in the developing world, since the late 1980s and early 1990s.

“Some have stalled out like Niger and others have continued,” Miller said. “As a political scientist, I want to know how and why governance matters. The future will tell if these same affects are also at play in other national parks and with other aid projects.”

The research paper, “The importance of national political context to the impacts of international conservation aid: Evidence from the W National Parks of Benin and Niger,” was written by Daniel Miller, Michael Minn, and Brice Sinsin. It is published in Environmental Research Letters.

A fellowship from the Social Science Research Council in New York provided funding for the research.