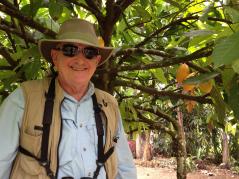 URBANA, Ill. – What makes a stream or river healthy? In the years following the growth of the environmental movement in the United States and passage of the Clean Water Act, researchers and managers struggled with this question of just how to measure the condition of our waters.

One prominent answer came from the University of Illinois, where alumnus and faculty member James R. Karr proposed the idea of an “index of biotic integrity” (or IBI) in 1981. Karr’s central solution to the question of measuring river health was to use the organisms that live in freshwaters to tell us about their condition – a concept that has subsequently been widely adopted in the United States to evaluate and enforce Clean Water Act compliance, as well as similar management goals internationally.

Karr’s first IBI used fish communities of the Midwest to determine the condition of rivers on a gradient from the highly impaired or even fishless, like parts of the Chicago River at the time, to more healthy rivers with intact native fish communities, such as the Embarras River south of Champaign-Urbana. Yet over time, the IBI method has evolved to include a suite of additional freshwater organisms, from algae to insects, that can help us understand if rivers and streams are receiving too many nutrients, too much sediment, or are experiencing modifications to their flow or temperature regimes beyond the range that their organisms can tolerate. The IBI concept even jumped to marine and terrestrial ecosystems, where managers and scientists have sought to use vegetation or bird communities to tell us about the condition of land and water. Karr’s publications proposing and developing the IBI remain among the most influential papers ever published in the fields of fisheries and freshwater biology, continuing to be cited by researchers and influence policy and management every year.

In recognition of his contributions to aquatic biology and environmental management, a new James R. Karr Lecture in Aquatic Biology will kick off on Friday, April 14 with an inaugural address from its namesake. Co-sponsored by the University of Illinois Department of Natural Resources and Environmental Sciences in the College of Agricultural, Consumer and Environmental Sciences and the Illinois Natural History Survey within the Prairie Research Institute, this lecture series will seek to bring a prominent scientist to campus every year to interact with faculty, staff, and students, and give a public lecture in the spirit of Karr’s efforts to conduct integrative science in the service of environmental issues and aquatic biology.

The lecture will begin at 3 p.m. on Friday, April 14 in the Monsanto Room of the College of ACES library at 1101 South Goodwin Avenue, Urbana.

“Clean water is not enough to ensure healthy rivers” is the title of Karr’s April 14 lecture.

About his talk, Karr says “For most of the twentieth century, water managers remained largely unaware of the collapse of aquatic ecosystems. They saw water narrowly, as a fluid to be consumed or used as a raw material in agriculture or industry. The 1972 Clean Water Act call to ‘restore and maintain the chemical, physical, and biological integrity of the Nation’s waters’ did not halt the declines. Efforts to protect water resources emphasized control of chemical contaminants; preserving aquatic life was not the intent.”

According to Karr, development of the index of biotic integrity provided a more integrative approach to measuring the biological status of streams. In addition, framing the ways people alter aquatic communities in terms of water quality, flow regime, physical habitat structure, energy source, and biotic interactions opened the door to a better understanding of the causes of water resource declines.

“IBI and what I call the five-factor model explicitly recognize the many connections between aquatic and terrestrial ecosystems and show that protecting chemical water quality alone is not enough to conserve or rehabilitate life in streams. Direct biological monitoring and assessment furnish a mechanism to directly assess the condition of water bodies, diagnose the causes of degradation, define actions to attain conservation and restoration goals, and evaluate the effectiveness of management decisions. These tools are now used by water managers throughout the world in diverse aquatic and terrestrial ecosystems. But society is still short on agency and political leadership needed to protect and restore living systems.”

Karr’s cosmopolitan career included far more than just developing the IBI concept. Following his Ph.D. in ecology from the University of Illinois, he worked as a professor at Purdue University, Virginia Tech, the University of Washington, and his alma mater from 1975 to 1984. He also served as deputy director of the Smithsonian Tropical Research Institute in Panama during the 1980s. His broad interests outside of freshwater biology include ornithology, tropical forest ecology, and environmental policy. He published highly influential papers on the community ecology of birds and their forests in both the tropics and Illinois, and trained a generation of successful scientists. He is a fellow in the American Association for the Advancement of Science, and received major career achievement awards from the American Fisheries Society and Society for Freshwater Science.

Kurt Faush, a professor in fisheries at Colorado State University who worked with Karr at the University of Illinois as a post-doctoral researcher, says “Jim Karr is a unique scientist, whose interests range from testing theories in community ecology to applying ecological principles to solve watershed management problems. He was a supportive and inspiring mentor to those of us privileged to work with him. He encouraged us to think big, and by his own example showed us how a scientist could work beyond the boundaries of science and outside their comfort zone to make a real difference.”

One of Karr’s former U of I doctoral students, Paul Angermeier, who is currently the assistant leader of the United States Geological Survey Cooperative Fish and Wildlife Research Unit at Virginia Tech says, “Jim has for several decades been a tireless advocate for applying sound science to environmental issues. His approach to these issues is consistently integrative, innovative, and synthetic. Remarkably, he is equally capable of seeing the biological world through the eyes of birds, fishes, insects, and corals. His thinking and analysis goes well beyond ecology to explore how knowledge from disciplines such as anthropology, economics, law, medicine, and political science figure into solving today’s wickedly complex environmental problems. Jim was doing ‘sustainability science’ decades before it was labeled as such.”

The James R. Karr Lecture in Aquatic Biology is free and open to the public.