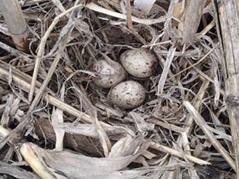 NRES Researchers Dr. Jeff Brawn, Dr. Mike Ward, and former graduate student Kelly VanBeek (a wildlife biologist at the Wisconsin Department of Natural Resources) report in a new study that several bird species – some of them relatively rare – are making extensive use of soybean fields in Illinois. The team found significantly more birds and a greater diversity of bird species nesting, roosting and feeding in no-till soybean fields than in tilled fields.

The team found more bird nests and greater species diversity in the no-till fields than in the tilled soybeans. Nest losses were high, however. About 80 percent of nests in the no-till fields and more than 90 percent in tilled fields failed as a result of predation or the onset of farm operations before eggs hatched or young birds were ready to fly.

To view the article in its entirety, and to access the paper, "Does No-Till Soybean Farming Provide Any Benefits for Birds?", visit the U. of I. News Bureau website: http://news.illinois.edu/news/14/0121no-till_JeffreyBrawn_MichaelWard.html.