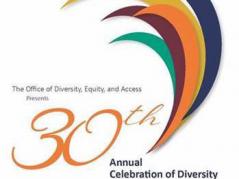 Manuel Colón, Undergraduate Recruiter for NRES, recently won an award during the 30th annual Celebration of Diversity at the University of Illinois. He was awarded the Larine Y. Cowan "Make a Difference" award for Advocacy for LGBTQ Affairs. Manuel received an engraved crystal placque during the awards ceremony.

Manuel, originally from Chicago, first joined the Illinois campus as an undergraduate student in 2006, where he led efforts to organize and advocate for diversity and social justice through University Housing in his roles as a Resident Advisor and Multicultural Advocate. He returned to campus in 2013 as an Undergraduate Recruiter for NRES. As of Fall 2014, he was selected to serve on the Chancellor and Provost Committee on LGBTQ Concerns. Though a new member to the group, he has taken on key leadership roles. His work has successfully created the University's first, official LGBTQ employee affinity group, Out @ Illinois. At the 2015 Lavender Congratulatory, he was awarded the Faculty and Staff Leadership Award for his "...desire to improve the climate for the LGBTQ people on campus." This past September,  he organized a University of Illinois contingency in the Champaign-Urbana Pride parade.

Keynote speaker for the event was Edward Feser, Interim Provost and Vice Chancellor for Academic Affairs.

Click here to view the video about Manuel's award.