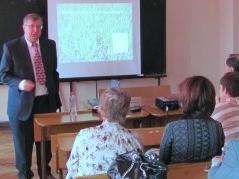 Ken Olson, NRES soil scientist, traveled in April to Moscow State University to deliver soil samples from South Dakota, Iowa and Illinois for laboratory testing. Dr. Olson was temporarily detained due to political tensions at the time, but successfully delivered the samples after authorities reviewed  the MSU invitation letter explaining the 24-year Cooperative Research program (funded by the U.S. State Department, NATO and the Russian Research Foundation) between MSU and the University of Illinois at Urbana-Champaign.

That was the first but not the last, challenge to the project. The planned soil sampling site at Belgorod (400 km to the southwest) was on the Ukraine border where troops were conducting military exercises. The MSU collaborators decided it would not be wise for the delegation to travel to the Belgorod site at that time. Sampling will be delayed until political relations are normalized.

Ken decided to stay in the Moscow region and gave two talks on the impact of flooding on public and private lands and soil organic carbon sequestration rates to the Faculty of Geography at MSU.