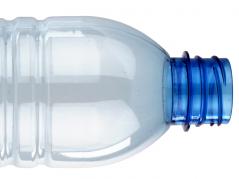 URBANA, Ill. –When football players train, they consume a lot of bottled water and protein drinks. In fact, it is estimated that the 115-member University of Illinois football team consumes as many as 10,350 cans and bottles in one semester—about 3,450 of those in the weight room alone. That’s a lot of empty bottles. Due to the efforts of a class project, rather than settling in at a landfill, many of those bottles are now being recycled.

Four U of I students decided to tackle recycling in just one of the sports facilities for their final project in an environmental sciences course in the College of Agricultural, Consumer and Environmental Sciences. “Students in the class learn about how to create organizational change and are charged to make something happen in the community,” said course instructor Ming Kuo.

With 115 football players consuming three or four bottles of water or sports drinks during each training session, the students believed that targeting this relatively small population could make a sizeable recycling difference.

“The Division of Intercollegiate Athletics at the U of I is a separate entity,” explained graduate student Meagan O’Grady. “Although there’s optional game day recycling at the football stadium and other recycling programs on campus, there wasn’t a program in place in the locker rooms or the weight room.” O’Grady also works as an athletic trainer for the training room, making her a natural liaison with both a personal connection and stake in the success of the project.

A bit of bureaucracy was one of the environmental team’s first obstacles – and a standard barrier to organizational change. “We contacted a number of different people to enlist support for the project,” said Xin Sun. “Our best contact was Freddie Walker. He’s the associate football strength and conditioning coach. We weren’t allowed to have direct contact with the football players so we relied on Freddie to convey information to them about the project and encourage the players to recycle.”

O’Grady said that Walker wanted to see the recycling project succeed so they knew they could count on him to give regular reminders to the football team.

Lack of funds for fancy recycling bins didn’t stop them. “At first, we got a bid for $152.98 to purchase one special recycling bin — way out of our budget,” said Chinedu Nwoko. “But we learned that there were more than enough trash bins already in the weight room so we repurposed a couple of those with blue recycle liners and special signs.”

Probably one of the more significant problems the students encountered was that because they started the project eight weeks into the semester, habits—which are hard to change—had already been established. Previously only all-purpose trash containers had been in the weight room so the players were accustomed to throwing all of their trash in the same bin rather than separating it.

Kuo complimented the students on their attention to determining the best location for the recycle bins and signs. “They had to think about where players are when they finish the drink because that’s the most convenient place to throw away the empty bottle,” Kuo said. “That’s human nature. They’re not likely to carry the empty bottle to another room.”

O’Grady said that they also had to move the recycle-only bin farther from the water cooler with its paper cups.

“Even though the bin was directly under the “plastics only” recycling sign, the environment was telling the players to throw their paper cups in the closest bin to the cooler,” Kuo said. When the group moved the recycle bin and sign away from the cooler, the new proximity helped reinforce the new recycling behavior.

O’Grady said she hopes this project provided what was needed to motivate more recycling in the athletic facilities.

Kuo said that O’Grady’s sentiment is one she hears frequently from the students in this particular environmental class. “They say that through these class projects, they’ve not only learned about sustainability in organizations but left a legacy in their time here — making the U of I just a little bit better than when they arrived.”