Paying for patience: Landowners willing to wait can profit from migration stopover 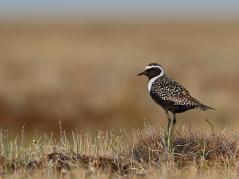 URBANA, Ill. – Numerous shorebirds, such as the American golden plover, stopover in East Central Illinois for three to four weeks during their spring migration. These birds need time to refuel and recover from their long flights and use wet agricultural fields to find food resources.  To help accommodate the birds’ needs, the USDA and the Illinois Department of Natural Resources is once again offering incentives to landowners who are willing to delay planting in order to provide valuable habitat to migrating shorebirds and waterfowl.

According to University of Illinois ornithologist Michael Ward, about 60 fields in East Central Illinois could receive incentives to install water control structures into existing tile drainage systems that could be used to provide valuable stopover habitat.  Drainage water management, as it is commonly referred to, would give farmers greater control over the amount of water on their land and be used to provide wet spots through April for migrating birds.

“Farmers who have a hard-to-farm wet spot on their land may be able to create temporary wet habitat for migrating birds, while receiving compensation for potential reductions in yield,” said Ward. “It kills two birds with one stone, so to speak.”

The newly installed drainage water management structure will allow farmers to retain moisture in their fields that can be used by crops during dry periods, help reduce nitrogen runoff, and keep fields wet a few weeks longer to give migrating birds the habitat they need to refuel for their continued migration.

“There are no out-of-pocket costs for farmers and we will actually pay you to keep water in your field a few weeks longer,” Ward said. “We know there are fields that don’t drain very well. If you visit them during migration, you’ll see 5,000 shorebirds there eating at a single time. Farmers have a lot of economic incentive to eliminate water and farm the land as quickly as possible. This program aims to take some of the pressure off of farmers to drain these fields and plant them so quickly by providing an alternative incentive to leave them wet for a while longer.”

Ward said exact dates of the plovers arrival varies slightly from year to year, but typically lasts three to four weeks. During this period the birds utilize wet areas to build up fat reserves and grow new feathers.  However, right now most of the shorebird and waterfowl species coming through the region do not have access to this type of habitat during their stopover in East Central Illinois.

“A lot these birds are declining in population. We think the reason is that they can’t find the food they need during their long migration,” Ward said. “The current global estimate of the American golden plover is about 200,000 birds, which is a point at which we start to worry. Because they rely on agricultural settings, it could be that small changes in agriculture such as leaving some wet areas available to them could mean a lot to their survival,” he said.