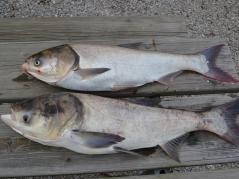 URBANA, Ill. – University of Illinois researcher Cory Suski has already shown that bubbling high concentrations of carbon dioxide (CO₂) into water is a deterrent to invasive Asian carp adults. The gas makes them feel “woozy” and they choose to swim away. His recent research shows that fish the size of an eyelash also experience negative consequences following CO₂ exposure.

“We conducted carbon dioxide challenge experiments on juveniles of four species—largemouth bass, bluegill, silver carp, and bighead carp, and on eight-day-old hatched fry of both carp species,” Suski said. “Results from the study demonstrate that juvenile fishes of all four species actively avoid areas of water with elevated CO₂ once concentrations reached approximately 200 milligrams per liter, which is lower than a can of carbonated soda.”

Suski explained that the larvae they used were so tiny that their behavior couldn’t be tested so gene expression data were used. “Even at only eight days old, there are physiological problems happening to those animals when they are put into a high CO₂ environment,” he said. “The biomarkers of stress turned on. So we now have evidence all the way from large adult fish to eight-day-old fish that CO₂ causes disturbance.”

Believing that two barriers are better than one, Suski suggests that carbon dioxide be used to keep invasive species from entering Lake Michigan by working in tandem with electric barriers. The electric barriers emit a low-voltage charge. As large fish swim toward the electric barrier, they sense the charge and swim away. Unfortunately, no non-physical barrier is 100 percent effective against all fish in all situations so additional barriers would help with control.

“What we’ve found is that none of these non-physical barriers is 100 percent effective—electricity, strobe lights, bubble curtains, and I’d even put CO₂ in that category,” he said. “They all have drawbacks. For example, the electric barriers are prone to shut down due to routine maintenance and power outages, and when debris clogs them, leaving the canals vulnerable to aquatic invaders. Also, working near the electric barriers on repairs poses health and safety concerns for the maintenance crew and shipmen.”

Suski says the CO₂ method doesn’t pose safety risks, is relatively cheap to use, and is portable with little installation or equipment required. The gas can be easily pumped into a small backwater area where there are known populations of carp—basically with a hose and tank of CO₂.

“The suppliers we have used to date have obtained waste CO₂ from oil and gas refineries or from soybean processing plants so we’re not smelting coal to generate carbon dioxide,” he added. “We’re taking waste CO₂ and repurposing it.”

So far, the CO₂ method has been tested in small laboratory tanks, ponds, and most recently at the Upper Midwest Environmental Science Center in Lacrosse, Wisc., on a much larger scale—1.6 million gallons of water covering half an acre. The preliminary findings from this test mirror the results from those on a smaller scale.

Suski describes his work on CO₂ as a progression and more of a research program. Tests have been conducted on a variety of scales and a range of species, including another Great Lakes invader, the sea lamprey. “Lamprey is an ancient species that predates animals with jaws,” Suski said. “So from an evolutionary perspective, we have data ranging from ancient species, to carp that originated in Asia, and largemouth bass and bluegill that originated in North America—a great diversity of fish that span a long timeframe.”

According to Suski, Asian carp grow rapidly and eat the zooplankton (small animals) and phytoplankton (small plants) that other fish and other aquatic organisms depend upon and pull the rug out from under the food chain. They’ve already invaded the Mississippi River all the way to Minnesota and are about 21 miles downstream from the electric barriers in the Chicago Area Waterway System.

“If they get into the Great Lakes, they have potential to spread throughout eastern North America,” Suski said.

“Molecular and behavioral responses of early-life stage fishes to elevated carbon dioxide” was written by Clark E. Dennis III, Shivani Adhikari, and Cory D. Suski and was published in a recent issue of Biological Invasions.

The work is supported by the Illinois Department of Natural Resources and the United States Geological Survey through the Environmental Protection Agency’s Great Lakes Restoration Initiative.