Researchers suggest plan to address hypoxia in Gulf of Mexico 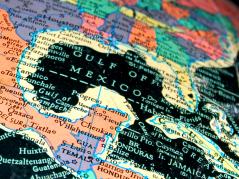 URBANA, Ill. – Despite a 12-year action plan calling for reducing the hypoxia zone in the Gulf of Mexico, little progress has been made, and there is no evidence that nutrient loading to the Gulf has decreased during this period. University of Illinois researchers have identified some of the biophysical and social barriers to progress and propose a way forward.

“We are suggesting that a partnership of researchers work closely with farmers to develop the suite of practices that are needed to reduce nutrient losses from agricultural fields,” said U of I biogeochemist Mark David who has been studying nitrate loss since 1993. “Working with farmers is essential to develop realistic practices on real-world farms—where the constraints that influence management are present—to document the effectiveness, and to communicate the environmental and socioeconomic results regionally.”

David said that the Gulf of Mexico hypoxic zone that was measured in July 2013 was 5,800 square miles (nearly the size of Connecticut), the result of riverine losses of nitrate and total phosphorus from the Mississippi River Basin. The goal of the 2008 action plan is to reduce the zone to a five-year running average of 2,000 square miles by 2015 and calls for a 45 percent reduction in total nitrogen and phosphorus, but these goals have not been met.

“Much of the nitrate that leads to the hypoxic zone formation is lost from millions of acres of fields across the upper Midwest, where drainage has been accelerated by a variety of agricultural practices,” David said. “Many flat agricultural fields are artificially drained with perforated plastic tubing or older clay drainage tiles to allow timely field work and enhance crop growth. There are now tens of millions of acres of tile-drained fields with large losses of nitrate, even with the recommended best management practices being followed,” he said.

According to the researchers, the combination of expanded and patterned tile drainage, increased fertilizer use due to more corn production, and more frequent high-intensity precipitation events all contribute to greater losses of nutrients and therefore a large hypoxic zone. This occurs even though nutrient balances (inputs minus outputs) have generally improved across the upper Midwest.

The USDA Natural Resources Conservation Service (NRCS) promotes and provides technical information on a wide array of techniques that can be used to reduce nutrient losses, including fertilizer rate, timing and placement; cover crops; nitrification inhibiters; water table management; tile bioreactors; constructed wetlands; buffer strips; and conversion of row crops to CRP or perennial crops. David said that unfortunately, few of these methods are used on tile-drained fields because they impose substantial costs and/or risks on the producer without increasing crop production.

“For example, end-of-pipe practices such as tile bioreactors or constructed wetlands have substantial construction costs, require land to be taken out of production, and provide no production benefit to the producer,” David said.

The researchers noted that important constraints are in the socioeconomic realm and relate to factors influencing adoption of farm conservation practices.

“Producers view themselves as stewards who care for the land, but they need to make a living from it,” said rural sociologist Courtney Flint. “Not only can they not see the loss of nutrients, they are disconnected physically from the downstream effects. Stewardship objectives may be strong, but they can be trumped or complicated by other economic, social, and environmental drivers.

“Additionally, there is a growing sense among farmers that policy makers are too far removed from the realities of farming,” Flint added. “This leads to an ever-widening trust gap that is a major barrier to effective collaboration and policy development for water-quality improvement in the Mississippi River Basin and beyond.”

The researchers believe that having farmers actively participate with researchers to develop realistic suites of practices could find widespread regional acceptance, but they realize that real-world, on-farm longitudinal studies of nutrient loss reduction practices will require considerable funding for cost-sharing practice development and implementation.