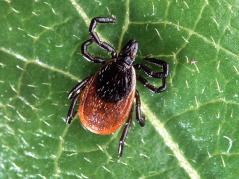 URBANA, Ill. – After they hatch, deer ticks take two years to reproduce. In that time, they morph from tiny larvae to nymphs to adults, with each stage feeding on a different group of host animals. For researchers studying the dynamics of Lyme disease, understanding host-tick interactions could reveal weak spots that may leave ticks vulnerable to control. A recent University of Illinois study simulates these interactions and provides guidance for effective management.

“Tick-borne diseases are increasing worldwide and have had an increasingly negative impact on human health. Effectively managing these diseases requires enhanced knowledge of the interactions of the tick, its hosts, and the environment,” says Samniqueka Halsey, doctoral student in the Department of Natural Resources and Environmental Sciences at U of I and lead author on the Ecological Modelling study.

Deer tick larvae, which look similar to adult ticks but are about half the size of poppy seeds, first attach to mice and other small animals. If the mice don’t successfully groom them off by scratching or biting, the larvae take their first blood meal. After their first winter, larvae molt to become nymphs – now the size of poppy seeds – and attach to deer and other mammals, including humans. These animals, too, try to rid themselves of the ticks, but nymphs that survive molt once more to become sesame-seed-sized adults.

Halsey reviewed 50 years of scientific literature on the deer tick, also known as the Eastern black-legged tick, to understand its interactions with its hosts. This literature contained information she used to inform her computer simulations, to get as close to reality as possible.

“This tick is found on over 150 animal species across the U.S. We don’t know how these host-tick interactions affect the tick’s complete life cycle and population growth. In this study, I wanted to tackle at least a small piece of that puzzle,” Halsey says.

Using figures from the literature on grooming rates, reproductive rates, and more, Halsey created a small computerized forest “landscape” – actually, a matrix of numbers and equations – and simulated the movement and survival rates of deer ticks as they interacted with just two hosts, white-footed mice and white-tailed deer. The simulation was set to run for 10 “years,” each of which took hours to complete.

Each strategy targets different tick life stages, but it’s not clear which stage packs the biggest punch towards reducing population growth. To figure it out, Halsey simply had to adjust a few numbers in her simulation.

“Increasing mouse grooming by 10 percent reduced the total nymph population by 30 percent in 10 years. Similarly, a 10-percent increase in deer grooming resulted in about 35 percent fewer larvae and nymphs in the next generation,” she says. “This result indicates that management interventions should target both the larval and adult reproductive stages of the tick life cycle; in other words, managers should treat both mice and deer.”

Halsey emphasizes, however, that tick populations in her simulations continued to grow each year, even with these management strategies in place. They just didn’t grow as fast as they did without the simulated management. She also notes that it took many years to achieve reduced population sizes.

“These strategies have to be implemented for a long time for you to actually see the effects. You can’t just put out bait boxes for one year and expect any change,” she says. “You need to put them out every year.”

In future simulations, Halsey will add another organism to the landscape: the bacterium that causes Lyme disease. After all, her ultimate goal is to understand and reduce transmission of Lyme disease to humans. For now, she has this advice, “Every time you go out into nature, check yourself for ticks. Look very closely.”

The article, “A spatial agent-based model of the disease vector Ixodes scapularis to explore host-tick associations,” is published in Ecological Modelling. Halsey’s co-author is James Miller, professor in the Department of Natural Resources and Environmental Sciences in the College of Agricultural, Consumer and Environmental Sciences at U of I. The work was supported with funding from an ACM/Intel Computational and Data Science Fellowship.