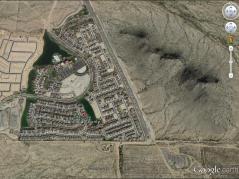 “We learned that when a property is foreclosed, it’s more nuanced than nature just coming in and taking over,” said U of I professional geographer Bethany Cutts. “Foreclosure doesn’t always mean management stops.”

Cutts said the team of researchers chose to test the impact of foreclosure on yard vegetation in Phoenix for several reasons. One reason is that Phoenix is a large, rapidly expanding community that has been heavily hit by foreclosure. In addition, because of the dry, hot climate, watering and other lawn management practices would be observable using remote sensing.

Another reason, Cutts says is more personal. She had been conducting a survey for a previous research project in 2009 at the height of the foreclosure crisis. When many of the surveys from that project were returned as “undeliverable,” Cutts started going door to door. She couldn’t help but notice the number of houses foreclosed.

“I could see that the lawns were dead, swimming pools were dry, and the copper piping had been stolen or intentionally removed by the previous owners,” Cutts said. “I became curious about whether this visible change always happens when homes are foreclosed. It could tell us a lot about how cities, neighborhoods, and individuals affect the ecology of neighborhoods. We wondered if we could see a signature of the foreclosure event using remote sensing techniques.”

Maricopa County includes most of the metropolitan area of Phoenix. Of the 1.5 million residential properties in Maricopa, approximately 28 percent, or almost 420,000, had gone through some sort of foreclosure between 2002 and 2012. By overlaying foreclosure data and the satellite images, research team member Michael Minn created what he labeled a "difference in deviation” calculation.  This allowed the team to examine change in the greenness of a yard before and after foreclosure in comparison to its neighborhood.  This helped account for factors other than foreclosure that influence grass growth.

Of the 420,000 foreclosed homes, the team estimates that for 28,000 properties, the yard became browner, which signifies grass death, while at the same time 14,000 became greener. “After comparing our results to Google Earth images before and after foreclosure, we are confident that the changes we detected on these properties are due to increased green (or brown) vegetation.” Cutts said. “We can’t yet say whether the change is accidental or intentional. In our next project, we'd like to know more about what accounts for the differences we observed.”

Cutts believes that the remote sensing methods her team developed bring something new to the study of urban settings. “Other studies have only focused on the highly resolved images. They haven’t said much about change over time. We now have a good way to show change over time in urban areas using this method.”

Another message from this study, Cutts said, is that although big-scale studies are interesting and useful, they are also insufficient in helping us truly understand how policy shapes these urban environments.

Cutts described how the new method might also be used to examine natural disasters such as the California drought. “For example, if you overlayed the natural rainfall with where water restriction policies are being put in place, you could look at the land before and after the policy and see if it is making a difference on individual households or neighborhood greenness overall,” she said. “You’d be able to get a sense of whether policies are effective and where they don't seem to work. You might be able to track the tensions between neighborhood association policies and municipal policies.”