Trading wetlands no longer a deal with the devil 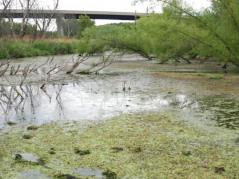 URBANA – If Faust had been in the business of trading wetlands rather than selling his soul, the devil might be portrayed by the current guidelines for wetland restoration. Research from the University of Illinois recommends a new framework that could make Faustian bargains over wetland restoration sites result in more environmentally positive outcomes.

U of I ecologist Jeffrey Matthews explained that under the current policies if a wetland is scheduled for development and a negative impact is unavoidable, the next option is to offset, or compensate, for the destruction through restoration of a wetland or creation of a new wetland somewhere else. Although the policies previously specified that it be a nearby wetland, regulatory agencies have begun favoring mitigation banking that does not ensure that a wetland with equivalent characteristics to the one being destroyed will be preserved.

“Currently destruction of wetlands can be offset by restoration of wetlands quite a distance away from the wetland that was destroyed,” said Matthews.  “It’s usually within the same large watershed, but if the upper reaches of the watershed up along the small headwater streams are being destroyed and replaced by larger mitigation banks that are perhaps on larger rivers downstream, the species that are characteristic of those small headwater streams may not be the type of species that tend to occur in those larger, main-stem high-order streams.” Like Faust’s pact, it may not represent an equivalent trade. “A lot of smaller, unique wetlands in a watershed might be traded for one large homogeneous wetland,” he said.

Matthews said that larger wetlands can support a greater number of species, and larger populations of those species, and because of the economies of scale, they are more cost-effective.  He said that these large wetland banks are maintained by people who have a lot of expertise in restoring wetlands.

“The disadvantage is it could lead to a shift in spatial arrangement of wetlands within a watershed, potentially moving valuable habitat away from certain sections of a watershed or from human communities who value the wetlands in their neighborhood. If it’s destroyed and replaced with a bank five miles away, we’ve lost some societal value,” Matthews said.

The study introduces a  model that illustrates three factors that limit the technical success of offsets: time lags, uncertainty and measurability of the value being offset, and recommendations for how policies can be more successful.

“We identified where policies are likely to be effective, in what situations these trading schemes are likely to lead to success, and what situations are the most risky and potentially should be avoided,” Matthews said. The study identified factors in the current policies that are most problematic from an ecological perspective and recommended ways to improve the success of these policies.

“When a wetland is destroyed, the value that’s being replaced at the new site may take decades to centuries before it’s fully restored, so that time-lag needs to be considered,” Matthews said. Trading the destroyed wetland for credits in an established biodiversity bank elsewhere helps eliminate the problem of time lags because you actually have restoration in advance of impact, Matthews said, but it’s not always equivalent.

“And in order to replace those values, we need to define what we actually value about the sites being destroyed. If we can’t define what we value about an ecosystem, it’s difficult to set effective benchmarks or targets to judge success or failure in the restored site.”

Matthews recommends that more time be spent studying sites that have been restored for offset purposes to know what methods have been successful in the past and what can be achieved through restoration in order to limit the uncertainty of future sites.  “One approach to that is active adaptive management,” he said. “Restorations are performed almost like experiments. Let’s tinker with it a little as we restore it, monitor the site over time, treat restorations as replicated experiments, and allow that to feed back to restoration practitioners so that they can incorporate that knowledge into future restoration sites.

“The deeper you look into complex ecosystems, the more nonequivalence you find,” Matthews said. “You could look at two forests and say they’re the same. But as you look closer, you might find that species composition is different.  Nutrient cycling processes, for example, may be very different in those two forests. And so as you look in finer and finer detail, you find layers and layers of nonequivalence. Where we place the value becomes critically important. The scale at which we consider two sites to be equivalent or nonequivalent and how we place value on certain uniqueness in sites becomes critical in what we accept as a truly successful restoration,” he said.