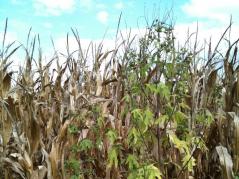 URBANA, Ill. – Using high-powered DNA-based tools, a recent study at the University of Illinois identified soil microbes that negatively affect ragweed and provided a new understanding of the complex relationships going on beneath the soil surface between plants and microorganisms.

“Plant scientists have been studying plant-soil feedback for decades,” said U of I microbial ecologist Tony Yannarell. “Some microbes are famous for their ability to change the soil, such as the microbes that are associated with legumes—we knew about those bacteria. But now we have the ability to use high-power DNA fingerprinting tools to look at all of the microbes in the soil, beyond just the ones we’ve known about. We were able to look at an entire microbial community and identify those microbes that both preferred ragweed and affected its growth.”

Although it would seem that the logical conclusion would be to simply add anti-ragweed microbes to soil, Yannarell said that adding microbes to soil hasn’t been successful in the past. An effective strategy, however, to suppress weeds might be to use plants that are known to attract the microbes that are bad for ragweed, and in so doing, encourage the growth of a microbial community that will kill it.

The study used Manhattan, Kan. (sunflower) and Urbana, Ill. (ragweed) and conducted trials independently at agricultural research facilities in Michigan, Illinois, Kansas, South Dakota, and Oregon, using local soils gathered on site. These particular weeds were selected because ragweed is a more common weed east of the Mississippi and sunflower is more common in the West.

The experiment allowed Yannarell and his colleagues to observe how three generations of ragweed and sunflower interacted with the microbial community in the soil. The plants interact with each other indirectly due to the differing effects they each have on the microbes in the soil.

“We used the same soil continuously so it had a chance to be changed,” Yannarell said. “We let the plants do the manipulation.”

Interestingly, they did not find the same ragweed-preferring microbe across all five states. “The microbial communities are different in each of these states, and yet we found the same overall patterns in each state individually,” Yannarell said. Illinois, Oregon, Kansas, and South Dakota (and in about 50 percent of the data from Michigan) each had local microbes that preferred ragweed and had a negative effect on its growth. “That was a take-home lesson for me,” he said, “that the actual organisms can be different in different locations, but they still may be performing the same functions.”

Yannarell said that currently one of his graduate students is studying ways to use what they learned as a method for weed control. “What we’re looking at now is the use of different cover crops, many of which are not harvested but just turned under into the soil,” he said. “We’re looking for specific cover crops that can make the microbial community bad for weeds as opposed to spraying. Can we create weed-suppressive soils?”

“An Affinity–Effect Relationship for Microbial Communities in Plant–Soil Feedback Loops” was published in the January 2014 issue of Microbial Biology. Others who contributed to the research are Yi Lou, Sharon A. Clay, Adam S. Davis, Anita Dille, Joel Felix, Analiza H.M. Ramirez, and Christy L. Sprague.