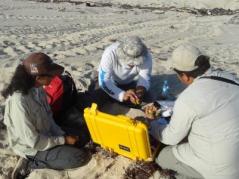 A new collaboration between Dr. Michael Ward and a team from Universidad Nacional Autónoma de México (UNAM) aims to protect migratory bird species by understanding how the birds select and use habitats in the Yucatan Peninsula.

Ward, an assistant professor in the Department of Natural Resources and Environmental Sciences, has been using automated telemetry systems to track bird migration across the Gulf of Mexico since 2009. His latest collaboration, with UNAM’s Dr. Luis Antonio Sánchez-González, has already provided valuable insight into how the birds refuel for the next leg of their journey and consequently how the habitats need to be managed.

“From our previous research, we know approximately forty percent of the birds tagged along the coast of Alabama make it across the Gulf to the Yucatan Peninsula. This journey is very taxing for the birds, and if they don’t have enough fat, they will fall in the ocean and die. Upon arrival in the Yucatan, they have just flown 1,000 km non-stop for 24 hours and most have used all of their fat. So, they have to eat to gain more fat before they continue their journey to South America,” Ward explained.

The Yucatan’s habitats, however, are being threatened by tourism development and proposed wind farms. Although there is interest in conserving habitats, Ward said the interest is not necessarily informed.

“There is interest in buying up habitat for conservation with the idea that any habitat is going to be high-quality habitat. But we know this is not true. We know some habitats are going to be better than others. So, we are tracking these birds after landing to see if they linger and eat for a while or immediately head somewhere else. The assumption being that if a bird hangs around a site, the site contains habitat in which the birds replenish their fat loads," he said.

To understand how the birds refuel, the team monitored birds arriving in two separate locations in the Yucatan Peninsula during September 2014: Isla Contoy and the El Eden Ecological Reserve. Ward and his team caught and tagged nearly 2,000 birds and used automated radio-telemetry to examine the birds’ mass at arrival, behavior, stopover length, and departure patterns.

“On the island, we caught over 1,000 birds, including species we didn’t expect to see, such as Vireos which nest here in central Illinois, and White-crowned Sparrows, which had migrated farther than their species is designed for. The migrants had two different strategies. Half decided to leave the island within 24 hours and flew directly to the mainland. The other half of the birds stuck around the island for 7-9 days before heading towards South America. This is longer than we expected birds to stay, but the island doesn’t have a lot of resources, so it takes this long to build their fat up. The flight to South America is another 2,000 km so they need as much fat as possible," Ward said.

His team also found interesting results regarding the birds that initially flew into high-quality tropical forest of El Eden.

“The tropical forest location is pristine. It takes three hours on a terrible road to get there, and there is no electricity. This is the best forest left in the Yucatan. The majority of birds who landed here spent up to 22 days or longer, sometimes longer than the transmitter battery lasted," he said.

The difference in length of stays suggested to Ward that the birds understand the limitations and benefits of the different habitats. On the island, they attempt to fatten up as quickly as the scarce resources allow and then move on to their wintering grounds. In the more attractive tropical forests, they take time to enjoy the abundance of food and extend their stay before continuing to the wintering grounds.

The information gained is critical for resource management.

“Both habitats are important, but they have different roles. The island is seen as a rest stop while the mainland forest supports longer stays. Some birds who land in the tropical forest may decide not even to continue to South America. We have to support interior areas by leaving them as pristine as possible, and we need to also either reduce development on the coast or conduct development in an ecologically friendly manner,"  Ward explained.

With the addition of ever more all-inclusive hotels on the Yucatan’s coast , and the consequent destruction of mangroves, Ward fears for the birds’ island habitats.

“Isla Contoy is a picturesque Caribbean island, and the birds all flock to mangroves, but most tourists want picturesque white sand beaches, and this image doesn’t include mangroves. There are laws to protect the mangrove trees, but people seem to be getting around them. We need to maintain the mangroves as much as possible in order to maintain bird and fish populations. To some degree it may be an education issue; tourists often do not understand the importance of mangroves, but they do want to see tropical birds and fish. We have started to provide educational materials to inform the predominately North American tourists about the importance of tropical habitats," he said.

Ward will collect another round of data in the Yucatan next fall and plans to implement a physiological approach which will collect blood to look at the birds’ stress hormones and provide additional information about the condition of the migrating birds. Similar to the way doctors can assess the health of humans, Ward’s team can conduct analyses to determine the health of birds in different habitats.

The successful collaboration has led to more funding and additional opportunities to protect the migratory birds that are shared by the U.S. and Mexico.

“The Island of Cozumel has provided funds for us to monitor birds arriving on their island this coming fall. We will prioritize the areas they should preserve as they consider wind farms. Wind farms have obvious benefits as a renewable resource, but they are hazards for wildlife, so we will help them determine the best places for wind farms where they are least likely to impact migrating birds," Ward said.

The collaborative work was funded through the new UIUC/UNAM joint research partnership program, coordinated by the Office of International Programs. Located in Mexico City with nearly 325,000 students, UNAM is Mexico’s largest university and one of Latin America’s most recognized institutions. The grant allowed Ward to purchase necessary equipment, including two new telemetry receiving units along with antennas and cables as well as travel to and from the Yucatan Peninsula.

For more information on the inaugural UNAM grants, visit:  http://intlprograms.aces.illinois.edu/content/winners-uiucunam-joint-research-partnership-program-announced.

Links to videos funded by the National Science Foundation: